Chris Gollon (1953 – 2017) was a leading British artist, and was represented by IAP Fine Art, which now hold his estate. Born in London, he enjoyed many solo museum exhibitions in the UK, museum acquisitions including the British Museum, and public commissions. He has exhibited at Art Chicago and also with Yoko Ono, David Bowie and Gavin Turk in ROOT, a crossover exhibition of contemporary music and art created by Thurston Moore of Sonic Youth, at Chisenhale Gallery, London. In 2004, he exhibited with Bill Viola, Tracey Emin and Craigie Aitchison in the exhibition Images of Christ for the Third Millennium in St Paul’s Cathedral, London.

His work has attracted increasing acclaim in the national press and specialist arts press: Financial Times, The Times, The Independent, The Guardian, Gramophone, Aesthetica, BBC Radio 4, BBC Radio 3’s ‘Free Thinking’ , BBC1 News. In 2009, Chris Gollon and his work were featured on Alan Yentob’s BBC1 programme Imagine, with the programme following him through painting a commission. His film collaboration with JABOD, entitled Kaleidomorphism One, was premiered in London at the East End Film Festival (2008). Novelist Sara Maitland’s book Stations of the Cross (Continuum, London & New York, 2009) was wholly inspired by and features Gollon’s 14 paintings of the Stations of the Cross, which were commissioned by the Church of England for a grade-one listed Sir John Soane church in East London. Chris Gollon: Humanity in Art by art historian Tamsin Pickeral (Hyde & Hughes) and endorsed by Bill Bryson OBE, was published in 2010.

In 2009, Chris Gollon was invited to become both a Fellow of the Institute of Advanced Study, Durham University, and its First Artist in Residence in order to work on the Being Human project with some of the world’s leading thinkers.  Following the success of that sojourn, he accepted an invitation to return as Artist in Residence at St Mary’s College in spring 2011. In late 2011, the Hollywood film makers of the Twilight Saga leased the copyright of one of his paintings to use it as an integral part of the story in Breaking Dawn: Part One.  From 2013-14, he collaborated with Grammy-nominated classical virtuoso musician and occasional composer Yi Yao, producing And It Came To Pass, an installation comprising a 41ft (12.5m) long painting and a 20-minute musical piece, which was premiered very successfully at the prestigious Henley Festival in July 2014. In the same year, his major solo show in Guildford Cathedral Incarnation, Mary and Women from the Bible was so well received that it become a major touring exhibition to British cathedrals, including Norwich, Chichester, Durham and Hereford . From 2015 – 2017, he enjoyed an artistic ‘boundary crossing’ with Irish singer-songwriter Eleanor McEvoy. Her lyrics inspired new paintings and those paintings inspired her songwriting, which led to the album and exhibition NAKED MUSIC in 2016 and the exhibition ‘Gimme Some Wine’ in 2017.

Since his death in April 2017, critical acclaim is ongoing and ever-increasing. Books and monographs continue to be published posthumously, featuring interviews/quotes (see publications page), and public acquisitions and major museum exhibitions continue. In 2018, Romsey Abbey purchased and permanently installed his diptych St Ethelflaeda. In autumn 2019, a major 3-month museum retrospective exhibition opened, which was the UK premiere of a new film installation FIREWALL, a collaboration with the Sleaford Mods (see Exhibitions page).  In late 2021, Eleanor McEvoy released her album ‘Gimme Some Wine’ with the title track being the song she wrote for and dedicated to Chris, and the painting he made in response features on the album cover. Chris Gollon lived and worked in Surrey, and his estate is represented by IAP Fine Art, London & Monmouth.

A television documentary is currently being made about Chris Gollon’s life and work. 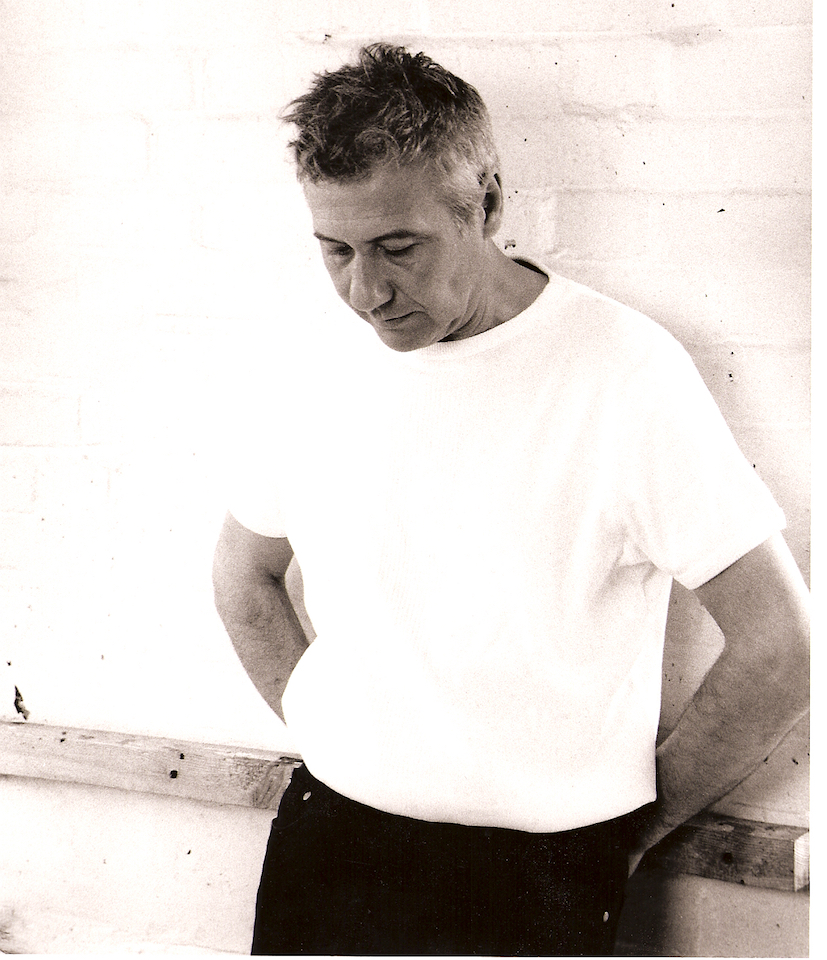