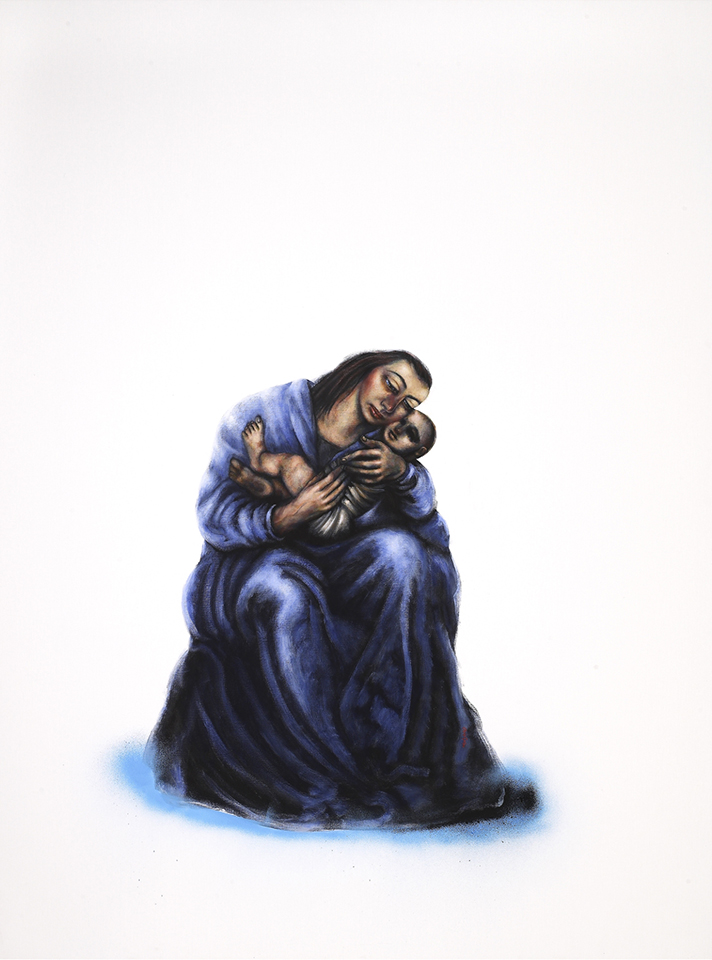 This painting is currently on loan to the beautiful grade II-listed Deanery of Chichester Cathedral, and may be viewed by appointment. It was also part of Gollon’s national touring exhibition to English cathedrals ‘Incarnation, Mary & Women from the Bible’ (2014 – 2016). In late 2015, as Hereford Cathedral displayed this large ‘Virgin & Child’ painting (96″ x 84″, 244 x 183cm, acrylic on canvas 2013), Chris Gollon was asked to write a text for a display to accompany his painting. This is what he wrote:

“In the past, even great artists thought nothing of borrowing a composition or design from an earlier master. This tradition continued even as late as Manet, who borrowed his composition for Dejeuner sur L’Herbe from Raphael.

Nowadays, I expect this habit would be considered as plagiarism. It still goes on of course, but artists take great pains to cover their tracks: as though they were doing something wrong. In the time of Rembrandt, neither he nor anybody else saw any reason for not adopting a great composition resolved by another artist.

This was the procedure I decided on for my painting ‘Virgin & Child’ on display here. As so often happens, I was looking for something else when I chanced upon an etching by Rembrandt entitled ‘The Virgin & Child’. Rembrandt had borrowed his design from a tiny engraving in ‘The Precious Book of Andrea Mantegna’. Neither artist made a painting from their studies, so far as I know, and my work is one such attempt.” Chris Gollon (2015)