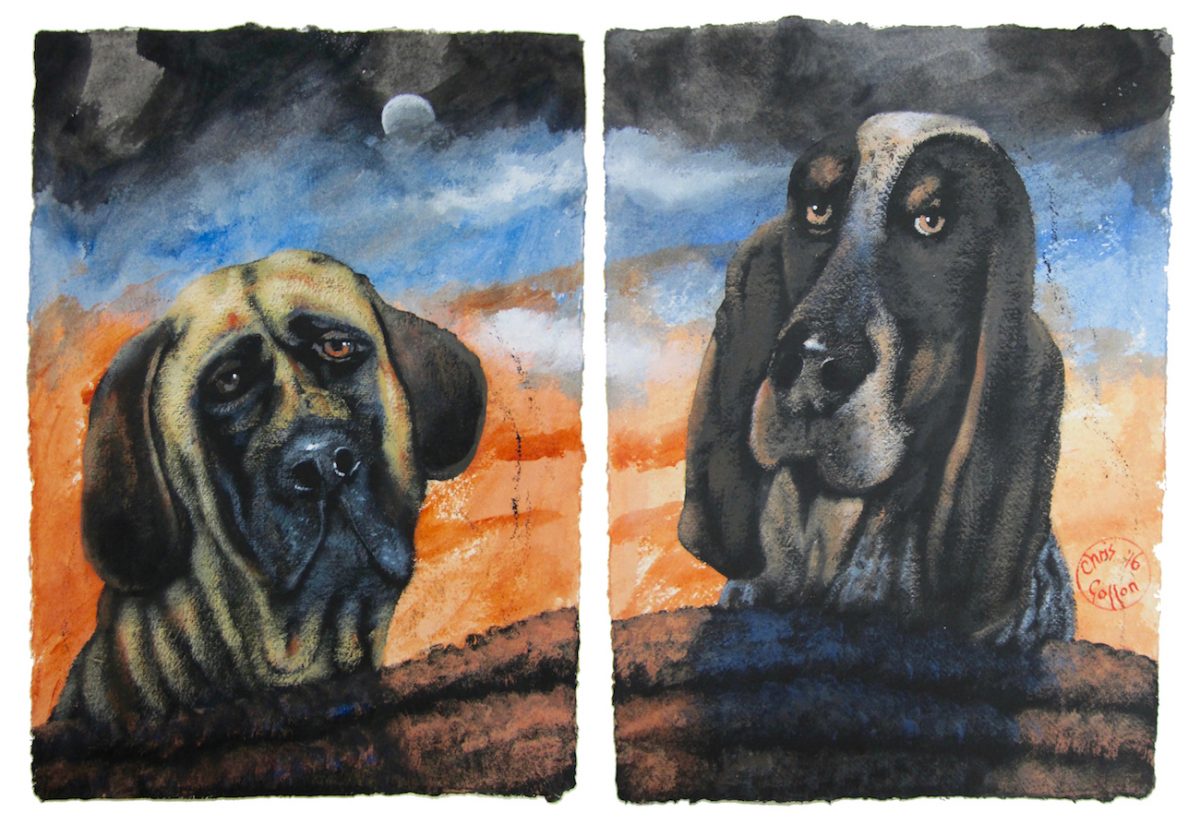 “Here is a quote from the late great art critic Robert Hughes on Goya’s ‘Perro Semihundido’: “We do not know what it means, but its pathos moves us on a level below narrative.”

” ‘The Caprichos’, Goya’s great series, a combination of etching and aquatint, was a financial disaster. Goya paid to have 300 sets made and only 27 sold. As a result, he did not even bother to print his other great graphic series ‘The Disasters of War’ (this wasn’t done until 40 years after his death). Thereafter, apart from his official portrait work, he would just paint images for himself. In the Black Paintings, done toward the end of his life, there is a curiosity: ‘Head of a Dog’. We don’t know what it means, and probably never will. This new series of paintings is my interpretation, the final one being a diptych, partially inspired by my recent visit to Monmouth and its connections to the Battle of Agincourt.”  Chris Gollon (2016)

David Tregunna, Director, IAP Fine Art, on Gollon’s diptych: “As you may know, the Romans used the mastiff in conquests from 100 years BC and Julius Caesar acknowledged the breed for its courage in battle. The mastiff certainly helped the Romans conquer our own little island too; but over centuries we then developed the breed and used it in battle against the French at Agincourt to very successful effect. The French used another ancient breed, the very majestic and most aristocratic of hounds, the Bleu de Gascogne, said to be the forefather of most hounds. They were brought in to protect the French knights, if fallen from their steeds; but they were no match for the English mastiff, despite being of similar size.  Indeed, the body of Sir Piers Leigh was guarded very successfully (and famously) from looting by his mastiff on the field of the Battle of Agincourt. In Chris Gollon’s diptych, the English mastiff is to the left and the Bleu de Gascogne to the right.”

A theme he returned to several times at different periods of his life, Gollon’s first cover version of Goya’s Perro Semihundido appears in art historian Tamsin Pickeral’s biography of the artist: Humanity in Art (2010).